skip to main | skip to sidebar

More Dance of the Hours illos

See the previous post--I'll be updating it further today and later during the week. These scans are tedious work, but I'm happy to be able to share them.
Posted by dude at 4:55 PM No comments:

Fantasia "Dance Of The Hours" storybook

This is an interesting little book I just acquired. 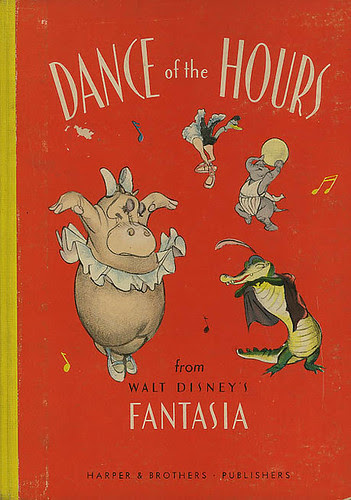 It's dated 1940; 20 pages, a first edition--although I'm pretty certain there weren't any other, later editions. If I remember correctly, this was published for a specific purpose.
Way back in 1981 I was visiting the Disney Archives, hosted by Dave Smith(still there, I believe). Then as now the Archives were filled to bursting with all kinds of rarities on display. There was no Frank Wells building then--but there was a much bigger backlot instead(all the much-filmed Disney homes were there: Fred MacMurray's, Hayley Mills', Zorro's street, etc.).
The archives were on the first floor of the Roy Disney Building that also housed Buena Vista and other corporate divisions.

Things were awfully quiet on the lot then. It was easy to wander around the manicured grounds, meeting no one save the occasional "traffic boy" on a bicycle delivering interoffice mail, and daydream about the great animators of yore as younger men and women. 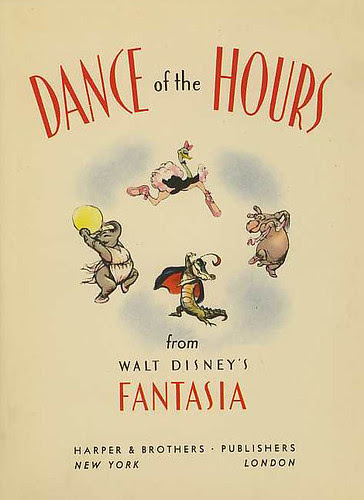 So back to the archives: I'd look throught the tip of the iceberg of material there, bookshelves with all sorts of rare volumes of Disney publications. There was a series of slim picturebooks, each with a title relating it to one of the segments of "Fantasia". I believe Dave told me these were published to establish the copyright to Disney's version of what were public domain musical compositions. The book itself wasn't meant for big sales, just to exist in the marketplace as token objects. Without them, presumably, any producer could have rushed out a short with elephants and alligators, say, dancing to ballet music(after all, those animals were public domain too--and Henrich Kley's drawings were available as freely to anyone as they were to the Disney Character Model department)...but with the book, the exact actions and look of the whole thing could be protected. And thus the books are all filled with lovely character art too. 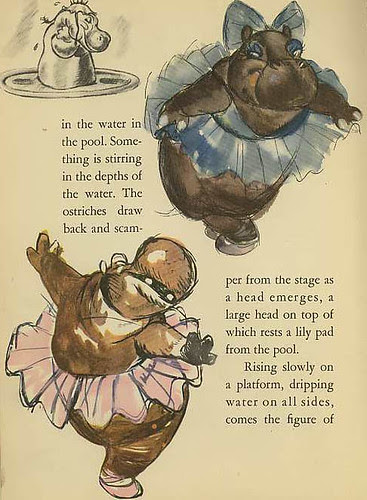 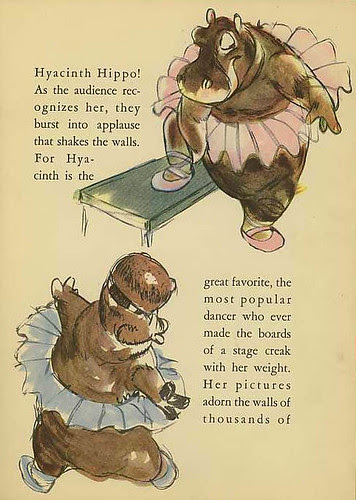 I'd never owned one of these books before now, and reading the text I think I remember the story correctly. This isn't so much standard storybook style at all--it's a literal recounting of the sequence--exactly the way a story man would pitch it to Walt. The resulting writing makes for curious reading.
A sample:

The chorus forms a semi-circle around the pool. One elephant comes to the center, dips her trunk in the water and drinks deep. Then she lifts her trunk high and blows a bubble of tremendous size, far larger than any of the others. Gently she breaks it from the end of her trunk, and then, as it floats slowly across the stage she runs quickly after it, leaps in the air and lands astride the bubble. It carries her gently about the stage as the other elephants blow it from one side to the other. Suddenly the bubble breaks, and the elephant lands on the floor, as gracefully as possible under the circumstances.

It goes on like this--loads of minutely descriptive text while the accompanying pictures seems almost randomly chosen from the film's visual development. There's also (as you can glimpse in the text reproduced here) a hint of what may have been originally intended to be animated, but was cut. It was ever thus!

If there's interest I'll post more of the pages, adding them to this entry.
EDIT: Okay, here's more: 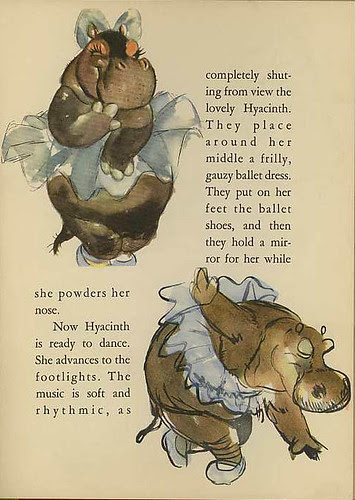 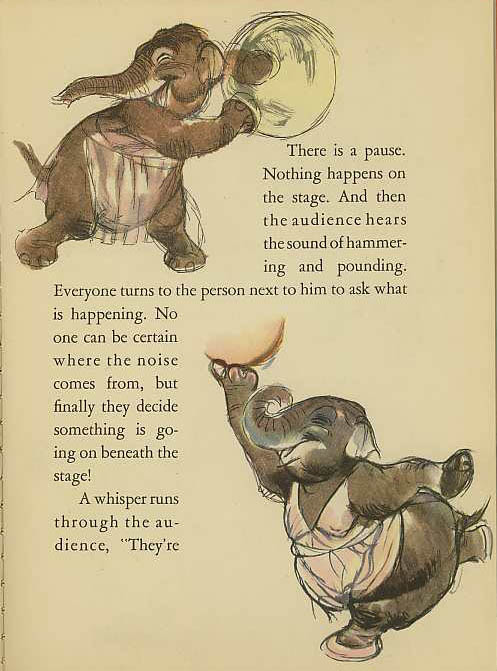 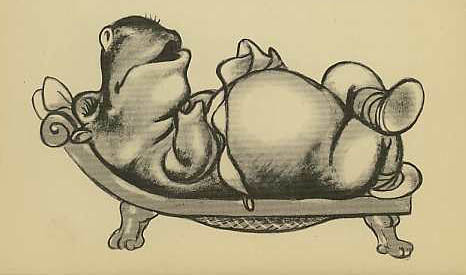 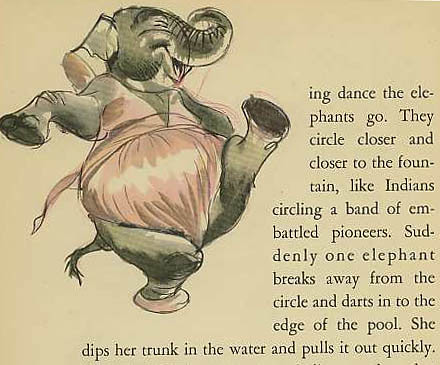 There's plenty more, but it's the weekend and the day is waning. Later!
Posted by dude at 2:08 PM No comments: 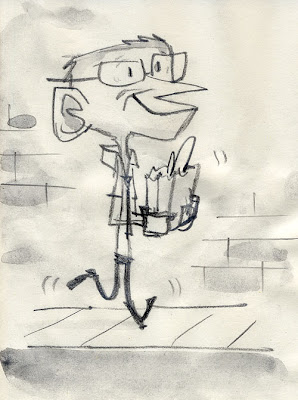 A lot of artists love to moonlight with girlie drawings, and many are superb at it. Few do the same with guys, likely because 99% of the artists are guys themselves and they'd prefer to work with a little more curvature when they're goofing around having fun.

Don Shank is tops with both genders on the pages of his sketchbooks. Back in the Turner development days Don had a fat sheaf of his girl drawings so choice that he was always granting requests for copies; I have one (and I wish I knew where I pu the darn things); they're completely wonderful--great designs and attitudes.

But since his blog has been up I've enjoyed his character Kurt even more than the ladies. Here's a guy I feel I know, who'd fit right in at a party, bar or in a 1961 film kibitzing with Bobby Morse or someone. It's definitely worth a trip to Don's blog to backtrack and vist the various Kurt posts--but be warned: the vast majority are rated G but a few aren't family-friendly.
Posted by dude at 2:26 PM No comments: 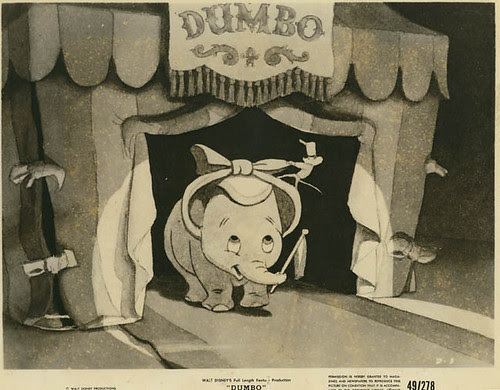 Here's another still I picked up from the same dealer as the last one(at Cinecon a couple of weeks ago--all of you in this area should get on their mailing list for next year, by the way). It's from the reissue release in 1949--you can tell by the numbers along the bottom there on the lower right: [19]49/278.

Judging from the overall look of the image I don't think it's a scene still that's exactly corroborated in the film--I'll check later. Not as cool as a story or rough sketch, but what the hey.
Posted by dude at 12:11 PM No comments:

All The Cats sketch 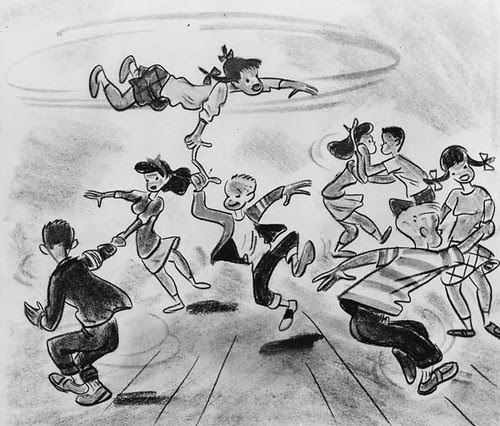 This is a publicity still dating from the original release of "Make Mine Music". The caption is still affixed to the back and reads in part:

"THE JOINT IS JUMPIN'---These 'ickies' and 'alligators'[?] cut a rug when the jam session gets under way[sic] with musical and vocal backgrounds supplied by Benny Goodman's orchestra and The Pied Pipers. The scene is from "All The Cats Join In" sequence, one of the highlights of Walt Disney's latest full length comedy musical in Technicolor "Make Mine Music".

I wonder if this is an actual story sketch from the boards, rather than something drawn just for publicity? It looks like the former. I was just rereading Michael Barrier's biography of Disney; in an interesting anecdote it's mentioned (by one of the story men) that Walt looked at a pitch of the early rough boards for this sequence and was singularly unimpressed, telling them to "tighten it up", try again or something along those lines.

Instead, the guys had Joe Rinaldi take the drawings down and trace over each one, inventing nothing new but making everything look a heck of a lot better. When Walt next saw it, he approved the "changes" and this great number was good to go. This does look as if Joe Rinaldi drew it.
Posted by dude at 7:35 PM No comments: 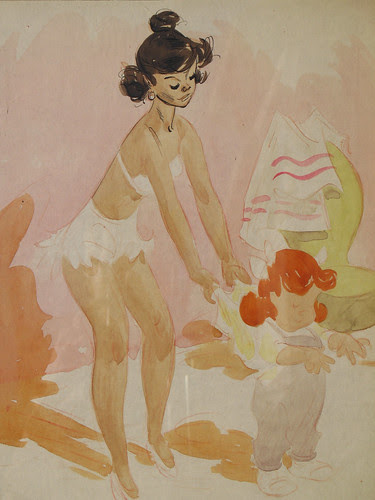 Here of course is a lovely, interestingly unfinished Fred Moore painting. I appears courtesy of the generosity of Pete Emslie, cartoonist, collector, caricaturist, blogger, Sheridan Collge teacher(animation) and all-around nice guy, judging from his posts.
He's a very thoughtful man as well as a prolific artist, and I can't recommmend regualr visits to his blog too emphatically. Here's a sample of a recent post's illustration(by Pete): 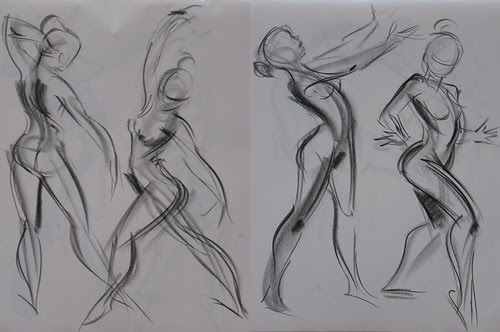 In addition to the Moore above, he posted yet another painting by Fred he's acquired, as well as several centaurette cleanups that are a must see. Really lovely.
Thanks for sharing, Pete!
Posted by dude at 9:33 AM No comments: 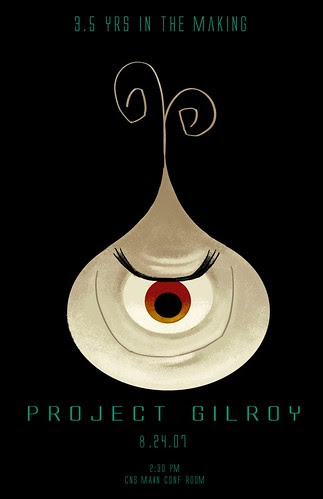 Hie yourselves over to the blogs of Shane Prigmore and Shannon Tindle to see stuff from their new film pilot, "Gilroy".

These two guys have so much energy and vim(okay, redundant perhaps-but I like "vim")...how they managed to do this pilot and everything else they've been doing the last couple of years--currently including full-time visual development at Dreamworks--I don't know, but it sure sets the bar.

I haven't seen more of "Gilroy" than the images on the blogs, but they're terrific: crisp, beautfully styled, appealing and make me want to see it. I hope it doesn't stay in TV development limbo for long. It's currently half animatic and half full color, finished animation: 22 minutes. I hope Cartoon Network decides to air it.


It still boggles the mind that not too many years ago it would have been pretty unthinkable for two young guys not already producers--and moreover, artists--to get a film like this made. Off the top of my head I can remember a couple of anomalies from the old days, pre-'97 or so:

Bruce Timm and Eric Radomski pulled off a fast one, literally--using very little downtime between seasons of Tiny Toons to make a drop-dead cool trailer to try and sell their own take on Batman.
Back then it was a huge shot in the dark--WB was anything but a risk taking company, and Bruce's style was completely out there as far as the then-currentl look of an animated show was concerned(thank God)...but they did it. It was a case of its just looking too damn good not to greenlight it. That entire franchise and a whole lot of other shows that followed came from those two guys basically doing it on their own (with some top artistic help and a good writer friend on baord, Paul Dini) within the studio framework.

Later when I was at Turner, Charlie Bean(another ex-TTA artist), and Don Shank(met him during Batman days) finished "Buy One, Get One Free" under the banner of Turner/H-B's short program. Don was at Turner Development too, and he and Charlie screened their finished pilot. It was simply beautiful. This again was a watershed as far as I was concerned: the styling, the music--the whole shebang was done just right. It was in effect a very high-end personal film, not a series but a one shot. But when we were toiling on Tiny Toons(Charlie was about 18 then), managing something in that style and getting it made was a pipe dream.

Of course, Spumco was doing it and did it first. But that situation was the grandaddy of anomalies and had behind it years of John Kricfalusi's sweating, berating, taking a lot of pummeling and his unique personal reputation before it got to the point where he and his closest friends became "Spumco" and sold the Ren and Stimpy pilot. Its success and continuing influence really has made the latter-day openness to better style possible--but an artist has still got to have his or her ducks in a row ready for launching when he gets a chance. And meanwhile, mouths must be fed and rent paid...it's a tough task to juggle a job and a life--forget about two or three jobs.

These newer projects are really fascinating to me because they've come about because young guys without the old-timey clout have worked their behinds off selling themselves, and putting the show where their pitches were.
Posted by dude at 2:57 PM No comments: